While debit card fraud is always a possibility, being careful where you use it can help keep your checking account balance out of the hands of criminals.Here are the risky places for debit card use:

Online is the No. 1 place where consumers should not use their debit cards. It's susceptible at so many points, such as malware on the consumer’s computer, eavesdropping on communications via the wireless network, hacking, etc. It’s impossible to know who is handling your information and wherever the data goes, it’s going to be vulnerable.

Skimming is the practice of capturing a bank customer's card information by running it through a machine that reads the card's magnetic strip. Those machines are often placed over the real card slots at ATMs and other card terminals. If the public has access to it, then someone has the ability to add skimming devices to it, position cameras on it and position themselves in a way where they could surveil it. You're better off using an ATM inside a retail outlet or other high-trafficked, well-lit place.

Thieves on gas stations are putting skimming devices or using small cameras to capture footage of debit card users entering their PINs so they can have free access to their money. Even if the thief doesn't manage to get your debit card personal identification number, or PIN, from such a device, he still may be able to duplicate the card's magnetic strip and use it for "sign and swipe" Visa or MasterCard transactions.


With the high potential for fraud in pay-at-the-pump debit transactions, it might make sense to use an alternative such as cash or credit cards the next time you fill up.

Restaurant keep customer data on file. Server takes your card and disappears for a while, having the opportunity to copy your card information.
"Any place where the card is out of hand" can increase the chances of fraud. Regardless of whether you use your debit card at a small restaurant or a big-box store, the possibility of fraud is always there.

Posted by http://vonhennigs.blogspot.com at 4:04 PM No comments:

Upcoming ban on recyclables in roll-out garbage bins in Charlotte?

Sorting trash for recycling still is a rarity. The green recycling bins can be found all-around, on public placed and in private backyards. All garbage items put into the gray garbage carts will end up in landfills. Throwing away recyclable items into ordinary garbage bins means throwing away valuable resources and future products. Those items include for example plastic bottles, aluminum cans and reams of paper. Yet, the general awareness does not grow. Are we having full recycling centers for vacancy? There are also many jobs depending on the existence of the recycling system.

Several parties are of the opinion that government regulations should not tell the population what to do with their garbage. Other residents propose to impose a fine on putting banned items in the garbage roll-outs. However, such a county ordinance would require the approval by the municipalities. There have been several public forums in Mecklenburg to gather feedback on this issue. The majority of the residents were very supportive as far as the issue of recycling was concerned. However, the solid waste management director Bruce Gledhill acknowledged that he is very limited in imposing penalties. Let’s hope the general awareness of recycling will grow itself instead of upcoming penalties forcing people to do what they should anyways.

There has not been a government shutdown for 17 years. Last time, it took the federal government two weeks to end the shutdown. Again, public services are suspended. On October 1, 2013 the US fiscal period began without a continuing resolution or regular appropriations. Political conflicts between Democrats and Republicans caused this circumstance: both parties could not agree on a spending plan. The Republicans offered to back down in case the new health care reform Obamacare was suspended for one year. The Democrats rejected this proposal, setting a stage for the shutdown. About 800.000 federal employees were furloughed without pay, only essential government functions are performed.

The administration has been downsized to a minimum, if at all. Passports cannot be renewed, the Statue of Liberty as well as most national parks are closed, press offices are not hold, even the Twitter account of the parliament is not active. The Shutdown does not only concern the US population, it also affects international tourists.

Time is short. Possible consequences of international scope could be fatal. According to the treasury secretary, the USA's official debt ceiling will be reached on October 7, 2013, provided that no compromise will be made or the debt ceiling will be raised. The national illiquidity would impend, affecting the national and international business activity. International financial markets would collapse, a slump would lead to extensive financial penalties.

As we have already discussed in several posts, North Carolina ratified the North Carolina Voter ID Law, which was finally signed from Governor Pat McCrory in August, following HB 589.

The new law was criticized severely for different reasons, e.g. the elimination of seven days early voting. Massively attacked was also the new mandatory requirement for each voter to prove his/her identity with a photo ID. This will discriminate especially the African American population and thus change their situation to a even worse one, after cutting down some of their (voting) rights through the U.S. Supreme Court decision from June 27, 2013 concerning the Voting Rights Acts (see our post of June 27, 2013: Urteil des Supreme Court: Rückschritt für die Rechte der schwarzen Bevölkerung?).

The relevant section 5 of the Voting Rights Act provided a mandatory provision for mostly southern states (North Carolina - as a whole - not being one of the states of the preclearance list) to get approval from the Justice Department before changes concerning the voting laws could be conducted. The Supreme Court hold in its Decision, that Section 5 was not unconstitutional, but the preclearance itself was. One reason for the latter was, that the list had been too old.

Besides, the two suits that were filed only hours after the signature of the Governor, the U.S. Department of Justice now also filled a lawsuit on Monday October 01, 2013, through Attorney General Eric Holder, trying to defeat the new law since it is “willingfully discriminatory”. Additionally the lawsuit will request a motion to bring North Carolina on a (new) preclearance list.

It remains open how the court will decide, but hopefully the judge/s will decide in the same manner as a state judge in Pennsylvania recently did, who had to rule on the Voting ID law and who delayed the implementation.

Furloughing due to the Government Shutdown

It is impossible at this point to determine how many workers will lose hours and pay or for how long. President Obama has signed a bill that ensures that certain members of the U.S. military and U.S. Coast Guard will be paid during a government shutdown. In past shutdowns, employees ordered off the job have been reimbursed, but there is no guarantee of such compensation, the Post notes.

Charlotte will likely escape significant harm from the partial government shutdown, says Mark Vitner, managing director at Wells Fargo Securities. “It’s a big drag on the Washington, D.C., area and, to a lesser extent, the Fort Bragg area,” he says. The shutdown causes doubts about the effectiveness of the federal government, he adds.

N.C. Gov. Pat McCrory says his administration has been working on a response to the shutdown for weeks and that agencies are being careful about spending state money that might not be reimbursed by the federal government, according to WSOC-TV.

While the government’s partial shutdown continues, most companies across the country are doing business as usual. Yet concern is rising that a prolonged shutdown would cause some work at private companies to dry up and consumers to lose faith in the U.S. economy.
Posted by http://vonhennigs.blogspot.com at 2:25 PM No comments:


Posted by http://vonhennigs.blogspot.com at 10:50 AM No comments:

Gündüz & Özkan, a Member of Bridge Alliance in Istanbul, had been nominated for the Legal Awards 2013 by the Lawyer Monthly Legal Awards.

Mr. Orkun Özkan, one of the founding partners of the law firm, was awarded as Capital Markets Lawyer of the Year in Turkey. The criteria of a diverse and far-reaching profession were met by Özkan, who was honored especially for his dynamic and trusted work in the field of the capital market law.

Furthermore, Gündüz & Özkan provides national and international legal advice in the areas of business & corporate, banking, finance and M&A as well as in the field of employment, intellectual property and immigration.
Posted by http://vonhennigs.blogspot.com at 10:46 AM 1 comment: 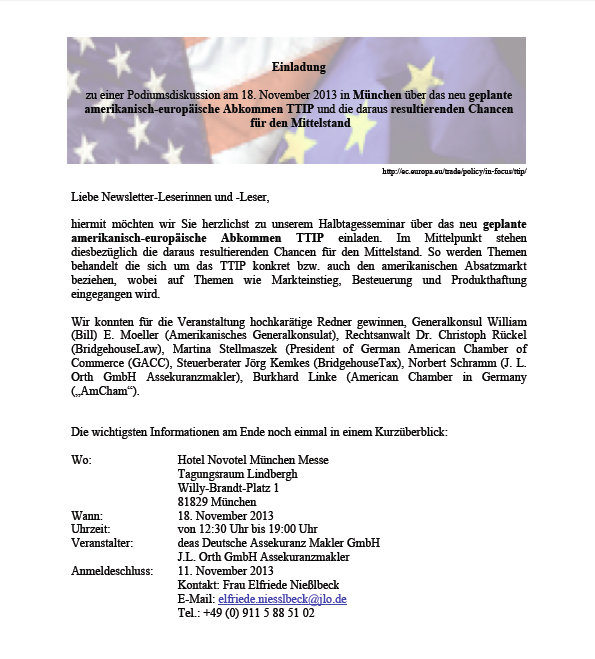 Posted by http://vonhennigs.blogspot.com at 1:17 PM No comments: