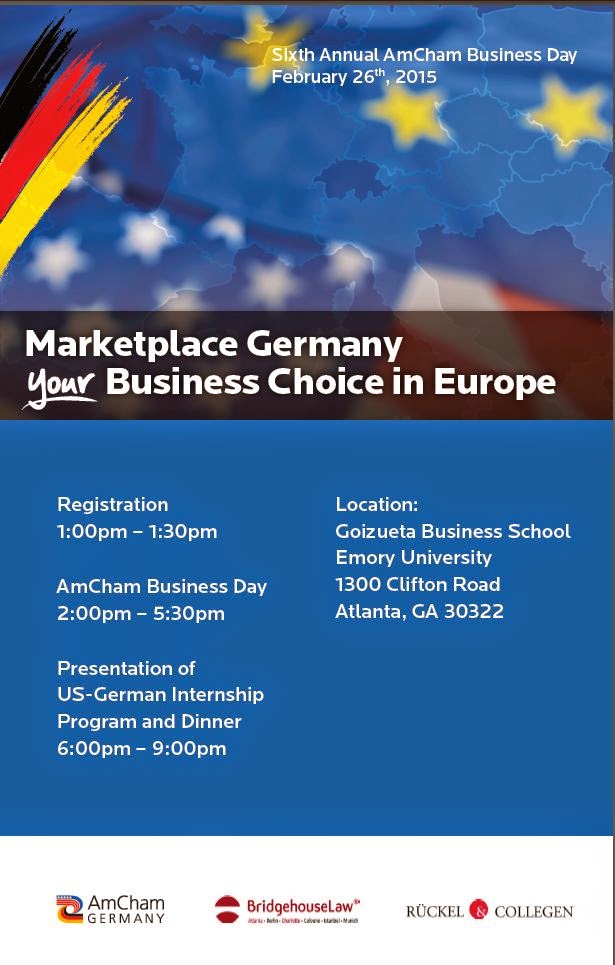 We hope to see many of you at the 6th Annual AmCham Business Day in Atlanta on February 26, 2015! This year's topic: Marketplace Germany - Your Business Choice in Europe.

Please RSVP by February 15, 2015
Vivien Cservenka, BridgehouseLaw LLP
Via Email: vivien.cservenka@bridgehouselaw.us
Via Phone: 404 885 5221
Posted by http://vonhennigs.blogspot.com at 9:59 AM No comments:

What is a foreign language worth?

In a recent podcast the authors of Freakonomics, Stephen Dubner and Steven Levitt, addressed the question "is learning a foreign language really worth it?" In sum, Dubner and Levitt found that bilingualism can make people better decision makers and helps with executive function in children and dementia in older people. However, they also indicated that an American who learns a foreign language nets a mere 2% earning bonus. This earning bonus would translate into an additional $600 for an individual who earns $30,000 a year.

The article first asserts that Dubner and Levitt's $600 earning bonus is entirely misleading and fails to take into account the long term effect. Rather than the $30,000, The Economist author believes that the more appropriate annual salary would have been $45,000, since this is the national average for individuals who graduate from a university. Moreover, Dubner and Levitt's calculations fail to take into account salary increases and interest earned on the language bonus. For example, if the additional money earned from the language bonus were placed in a retirement account, the individual would amass nearly an additional $67,000 over the course of a 40 year career.

Second, Albert Saiz, an MIT economist, found that the 2% language bonus used by Dubner and Levitt doesn't accurately reflect the potential bonus earned by learning different languages. For example, Saiz found that the language bonuses for different languages are as follows: 1.5% for Spanish, 2.3% for French and 3.8% for German. Using the factors mentioned in the previous paragraph, the long term effect would amount to an additional $77,000 for French speakers and $128,000 for German speakers.

But why do different languages account for different returns? Simply put, it all comes down to supply and demand, and in the American context more so supply. For example, in the US the number of individuals fluent in both English and German is much smaller than those fluent in English and Spanish and thus the German speakers are able garner higher language bonuses.

Not only does bilingualism affect the earning capacity of the individual, but it has also been found to have a substantial effect on a country's GDP (gross domestic product). Recently, a study conducted by the Cardiff Business School found that a lack of foreign-language proficiency costs Britain's GDP nearly £48 billion ($80 billion) or 3.5% each year. With this in mind and considering an optimistic estimate that half the world's population might speak English by 2050, there is still a considerable amount of demand for multilingual individuals.

In light of the aforementioned, it is clear that learning a foreign language may be a bit more valuable than previously thought, especially in languages such as French and German.

Posted by http://vonhennigs.blogspot.com at 10:42 AM No comments:

The European Union will not water down its strict geographic food names under a far-reaching trade deal with the United States.

Wines, meats, cheeses and other delicacies produced in Europe have a special status that protects their name and origin from imitation; Parmigiano, Champagne, Feta cheese just being a few of these.

German Agriculture Minister Christian Schmidt told a magazine that under the proposed trade pact with the United States, "we cannot protect every sausage and every cheese specialty." That did not go over well.

The United States says the EU system is unfair because European immigrants have long produced such products as Greek-style cheese "feta" and should be allowed to export it as such.

"We have made clear to our American counterparts that the protection of geographical indications is one of our main priorities," EU trade spokesman Daniel Rosario said.

Tensions over the emotive subject of food risk eroding already fragile public support for a deal that proponents say would increase economic growth by around $100 billion a year on both sides of the Atlantic.

Some EU farmers fear that these changes to the system would see Europe importing Nuremberg pork sausages from Kentucky or allowing U.S. food companies to export Parmesan cheese even when the milk has not been produced in Italy.

But the United States argues that terms such as feta, prosciutto and bratwurst are generic, highlighted by the fact that Denmark can sell Greek-style feta in Europe. More broadly, U.S. farmers complain that the farm trading relationship is unfairly skewed in Europe's favor and want it addressed in the trade talks.

Posted by http://vonhennigs.blogspot.com at 10:38 AM No comments:

The Grand Coalition (CDU/CSU and SPD) in Germany agreed on a compulsory gender quota minimum of 30% women in the non-executive boards. Starting in 2016, a of the positions in those boards must be held by. This law will apply to companies with employee representation on the supervisory board.

Men still hold over 80% of the positions in German boardrooms. Just 7% of executive boardroom seats among the 30 largest companies on the blue chip DAX index are held by women. The number of women in non-supervisory board positions has declined over the past year, found a survey by the Women in Supervisory Boards (FidAR). In public companies, the number of supervisory board positions held by woman app. 9% over the least three years.

The quota itself was negotiated almost a year ago but other issues have held up a formal accord among the parties. Chancellor Angela Merkel's conservative Christian Democrats (CDU) - and their Bavarian sister party the Christian Social Union (CSU) - have resisted legal quotas in the past.

The policy was championed by Merkel's junior coalition partners, the Social Democrats (SPD).
Posted by http://vonhennigs.blogspot.com at 10:36 AM No comments:

Into the future with German 3.0

English has long since been the most widely spoken language in the world, but it's no secret that German plays an important role as well. In January of this year, an initiative called "German 3.0" was launched by the Goethe Institute to spark new dialogues and examine and shape the future of German.

With roughly 60 events scheduled throughout Germany and abroad, the initiative hopes to promote knowledge of the German language worldwide. To do so, the Goethe Institution has teamed up with diverse promoters in the areas of society, culture, business, and science. Though the goal of German 3.0 is focused mainly on promotion of the language abroad, it has been noted that the promotion of the German language must begin at home since how native speakers handle their language will be taken very seriously around the world.

During the initial stages of the project, it became quite clear how important multilingualism is in modern Europe. As such, one of German 3.0's thesis' stresses that the need for language courses and training on intercultural competence will continue to grow. Currently, near 15% of the students studying in German universities come from a foreign country, a number which is expected to grow to 25% in the coming years. The initiative has introduced in a number of universities projects that break new ground in promoting multilingualism. As a whole, German 3.0 hopes to raise awareness that the German language now more than ever is the key to social, cultural and economic development in Germany.
Posted by http://vonhennigs.blogspot.com at 10:35 AM No comments:

N.C. law has been changed in some interesting parts. Here's a short overview concerning the most important changes which went to effect on Jan. 1st 2015.

Real estate
Changes has been established in case of buying property. If you now buy property or have already bought it on or after January 1st, the owners of that property have to furnish a mineral and oil gas rights disclosure statement.

Transferring property which a married couple owns as "tenants by the entireties" to a trust has from now on the same protections from each other' creditors as they would have before transferring it to the trust.

Driving
Anyone placed on probation for impaired driving will serve from now on a sentence in a local confinement facility, not in the state prison.

From now on the N.C. Department of Motor Vehicles is required to issue a single annual validation sticker for a license plate.

Election changes
From now on you have to be affiliated with a party for at least 90 days if you want to file as a candidate in a party's primary. To file with economic statements coming from the State Ethics Commission is also needed.

Cuts in film incentives
Video productions can apply for grants at the Film and Entertainment Grant Fund within the N.C. Department of Commerce if the production meets minimum qualifying expenses $ 5 million for films and $ 250,000 per episode of a television show or for commercials.

Background checks
From now on criminal history checks are authorized for firefighters and emergency medical service personnel, even for volunteers.
Posted by http://vonhennigs.blogspot.com at 10:31 AM No comments: